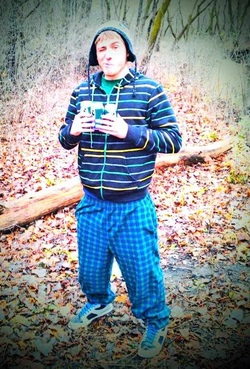 Keep lookin' up because he is unbeatable: RipKid
_RipKid: Well where do I begin?! This friendship grew upon beers, parties, and becoming Eskimo brothers! Back to square one; RipKid and I use to party at the same place but never actually talked or anything but we both knew who we were. My first views of RipKid was a chill ass funny kid by not only by his appearance but the way he presented himself; chillin’ in pajama bottoms, drinkin’ on a forty ounce of Bud Light, and swaggin’ to the core! Such a G I couldn’t imagine what would happen if our awesomeness would enjoin forces! Obviously take over the world but when I seen him attached to a rope with two other lads I knew that he was the man with the plan because instantly I wanted to get in on being rope friends! I thought it was the most funny and clever move that only I would think of! But there is never only one; there is always a clone. Shortly after that Big Kenny told me that my girlfriend at the time was flirting with RipKid pretty hard and sending him some dirty text messages but RipKid kept his distance because she was my girlfriend; I don’t know if we even talked to each other at this point but RipKid showed his respect to a fellow beer drinker and I couldn’t have been more pleased with the brothership. I confronted RipKid about the situation and he told me that they would kick it and drink but nothing further went on; just gossip getting out of hand. At that moment in time she broke up with me and I noticed how they both started talking more than usual and RipKid started talking to me a little more than usual also. All was good with no worries considering I told him it was all fair game in the battlefield! A few weeks go by and we talked more and drank a lot more every weekend! The laughs were loud and continuous along with the stories we shared with each other!

Porch: “If it wasn’t for her we would never be best friends!”

It all clicks like that and there you have it; ESKIMO BROTHERS! From there on we kept making jokes and going hard in the paint! Literally mother fucking hard! RipKid and I recently started making Stay Wasted episodes and the damage we are doing couldn’t be fixed by Bob the Builder! It’s hard to find a few friends that match your life style with every way, beer, and women but when you do you know you two are G’s in the pub when you both burst out laughing in the middle of pure silence at the same thing! It’s like we have been great friends since we were little passing secrets notes around back and forth about some project we were working on; such as Op Z plan B back up option H! So many more days to come and not enough beers to drink but every day is nuts and I can’t wait until the next! If I could describe RipKid in one word for all you kids who want to be a straight up G nothing else could fit RipKid better than “Unpredictable.”