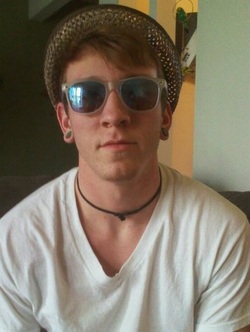 The one and only Ginger Ball Joes.
_Ginger Ball Joes: The man of wonders and the man with a dick known as “THE PUSSY MAGNET!” Ginger Ball Joes and I go way back. Way back to when he was 15 and I was 17, same night as I met Stefani & Presto (Beginning of my senior year.) We went from saying hello; to him witnessing me take a piss in the middle of Rand and Thomas late at night, to stealing beer from an outdoor fridge, to running from the house owner, to a high-speed chase from the cops, (Which his car lost!) back to Mac Park to Schuh and I chugging beers! For two people to go through that little experience is like taking Ecstasy. But he was 15 years old? So I must have done all of the cool stuff right? Because I’m older?  I’m Porch McDonagh right? So how is he any cooler than any other 15 year old? Well I will tell you all this! Ginger Ball Joes is one of the chilliest kids you will ever meet. So chill you will forget he is 15, younger or not, the cunt is still cooler than me. He doesn’t need his own website to be awesome I will tell you that; or to be an attention whore. But whore he is! First time having sex was a threesome, before he hit age 17 he has sex with 10+ females, and I’m sure he never jacked off before. What? Jacking off is my best friend and I am 20 years old and had sex with 5 girls. I remember back in the day when Ginger Ball Joes was still 15 years old but I was 18 years old by that point. I would go party at my buddy Nev’s house.  Probably one of the best party houses I have ever been too; the sickest times and drunkest moments. The people who would go there would be 20 years old+ and some people a year below me. Me, being as awesome as I am, I would invite people over and we’d all get drunk and pass out there. But typically I wouldn’t bring 15 year olds to any parties but Ginger Ball Joes was a HUGE exception. How you ask? Well these quotes after a night long of drinking should be enough.

Porch: “Ginger Ball Joes, tell them how old you are.”

Tommy: “I WISH I WAS THAT COOL RIGHT NOW!”

See what I mean? Tommy was 20 years old at the time and Shirmer was 22 years old. Not cool enough for all you lil LL Cool J’s?! Well, this hot ass girl Becca would always go over to Nev’s and she was never up for grabs but Ginger Ball Joes always finds a way to hook up with the hotties even if they are my age. But what are you going to do? Ask someone 3 years younger than you for tips on getting laid? Tips on being awesome? How about a tip to FUCK OFF! I am awesome, just in my own ways. A man so creative, cleaver, outgoing, and one of those people nobody will ever forget is a man with a meaning to his name. But for Ginger Ball Joes, the only way to narrow him down into one word would simply be: “Extraordinary.”