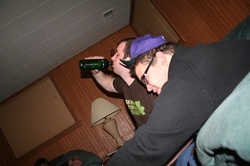 Porch's Circle with a dash of Jaeger.
Here is a drinking game I made up one random night and it was something I always wanted to do; make my own drinking game! I originally got the idea for this game from when I would drink over at my buddy Nev’s house on the regular. The game was called lynx; the basics of the game gave me the idea on how to start it and develop it from there. The game was made in December 2008 and it sure does the job on fucking you up! Hope you all enjoy the game and I am always down for a game of Porch’s Circle at any party you see me at!

Pick a card from a standard deck which is spread out on the table face down, the person who choses the card must chug for a count number of seconds on the card (J=11, Q=12, K=13, A=14, Joker being the Wild Card) between the people playing. For example: Say you pick a card, the person to the left of you starts counting starting at “1” then the next person says “2” and so on; when you pick a card you keep it in your pile until the game is over. The person that is counting may say the next number as fast or slow as they want; the player who picks the card starts chugging their can of beer when the person start counting; also as fast or as slow as they want but if the drinker isn’t drinking then the counters may stop counting until the drinker starts drinking again. If the person chugging the beer finishes before the next person in the count says the next number, that person must finish the rest of their beer within 1 minute. For example: If the drinker pulls a 7 and finishes their beer before the counters reaches 7 then the person who didn’t say their number on time must chug the rest of their beer within a minute; if reached the number 7 then the drinker stops drinking and the next person continues by choosing a card and so on. If they do not finish their beer within 1 minute, the person that caught the drinker is allowed to pick a card out of the failed chuggers pile and add it to his/her pile at random. If the person that is picking a card draws an ace of spades, then all of the people playing must finish their beers and that person must go again, If the person who draws a card picks a king of hearts (the suicide king), then the person who is chugging must finish their beer and go again. If you pick the Joker Card then that means it’s a wild card. You can take any card from anyone’s deck and make them drink that amount of seconds or divide the numbers for more people to drink. The aim of the game is to pick all high cards and at the end of the game you add all your cards up and whoever has the highest wins and whoever has the lowest losses. The person who lost has to drink the remaining beers unless voted otherwise.

Recommended: Two cases of beer to one standard deck of cards.