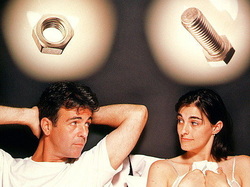 Growing up and being annoyed with relationships comes to a time in your life where you just want to chill. With every itching moment we have, there comes a thought of a loophole on how we can overpass this without problems? Sex is on everybody’s mind and their daily to-do list but it’s never as simple as grabbing some ice-cream. They all start off the same: “Yeah, it’s just sex!” But realistically, it’s a path towards disaster because we are all sexual predators.

The in-love girl: This one is a classic; she will simply start off with simply easy in easy out sex. After a few weeks of fun, the casual cuddling will come in play, which will increase overtime. As for myself, I love it as much as I don’t. But in the general matter, you just want to lay back and relax after busting a load. Relevant to a Daniel Tosh quote: “Immediately after, you feel shame! It’s amazing how much you liked this person lying next to you ten minutes ago; and now? Ugh, you could watch her get hit by a bus and nothing would make you happier. That’s what sex feels like.” But over time after that, it comes to the point where feelings are over loading and she can’t find anywhere else to hide them; a disastrous tornado of emotions, cuddling, holding hands, and kissing in public. When being “fuck buddies” has been thrown out the window and her evil plans fall in place. By the end of your untitled relationship, it becomes more along the lines easy in hard out.

The I’m up late & bored: Now this can be anyone of us! We are all easy targets when it comes to this simple regretted option. We’ve all been a booty call from one to another and some take offence to it. God forbid, he/she won’t take you out for a steak dinner with roses on a yacht across the Caribbean! But you two will be sharing one of life’s most precious gifts together! SEX!  If you don’t want to then don’t, if you do then go! No point bitching and complaining: “OMG how could someone do that?!” The trick is to have easy access with words kept between one and another. Get your fix and keep on keepin’ on!

The Ex Relationships: This may be one of the easiest forms of sex. Each other’s past is filled with sex, happiness, and problems. Which is similar to a Vin Diagram: Sex brings happiness and sex solves problems! Ex’s always have that screw still bolted between them. When in doubt, up or down, there’s always a back route that they can relate too. Have you even seen one of your ex’s at a party and ended up doing what you told all of your friends that you’d never do again? It’s like the vegetarian sharks in Finding Nemo. Once they got that urging scent of what they wanted, it’s was one of the hardest no’s they could ever say. You know the taste and you know how it will end.

The College Girl: This girl is an unaware hunter in the jungle. There are many options in her surroundings but it’s not exactly the fastest or most delicate she is looking for. This girl is on the search for something exotic. Something to fill her needs which she cannot by herself. Many may call this “Her experiment years”. She is looking for the right scratches that will soon become an everlasting pleasurable itch. This girl’s goal is not to be “the dead fish” or “hey, what does this do…*SPLAT*”. She refuses to be the Helen Keller of the bedroom for her other half. She wants to be the Angelina Jolie of stardom. Once she is done hunting in the jungle; she simply settles down with her selected prey and leaves.