5 Easy Ways To Avoid A Hangover 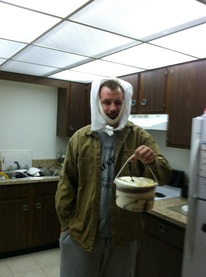 You'll do anything to get rid of a hangover.
Written Jan. 2013

After a night of one too many and what seemed like good idea comes with a consequence that we all dread during our drunken sprawled out bear hibernations. With ever great night, there is a worse hangover waiting like a nagging wife. Our thoughts and question marks have never gone far, considering rolling with the punches seemed to be like the only option. But with every punch, there is a way to block it and send a jab right back! Here are some easy ways to cure your hangover.

Bobby Boucher’s H20: Water is one of the high and mightiest ways to cure your hangover. Water is like the defensive mechanisms going into your body. By meaning this, drinking water in-between drinks and/or before you go to sleep is the best way to sack your hangover. I understand you don’t look like the man of the hour every hour on the hour with a glass of water out with the boys but there is always a loophole! When you wake up in the morning feeling like there are monkeys with cymbals going crazy, get up and drink some more water. But try to avoid drinking water that is too cold or too hot; room temperature would be best. Also, adding a lemon to your water will help soothe your stomach and/or adding tablespoon(s) of plain honey to your water or even tea! This will help the dryness of your throat.
Rather something with more taste or zing to your morning drink? Well this is okay because there are other options to help your morning. Sports drinks such as Gatorade, Powerade, Lucozade, etc. are also meant to be good to get that good tingly feeling to start your day. Don’t want to run to the store? If you have any Vitamin C drinks in your household, they will help just as well! They will soothe your stomach just as adding a lemon to your water. Still not satisfied? Ginger Ale is also recommended to your options! Where my coffee lovers?! Don’t drink coffee. Unless you love a challenge then go ahead! Caffeine will only make you more dehydrated even though the thought of it seems heavenly. Any type of dairy products, such as milk, is also in the “No-Zone” because the dairy will not settle well with your stomach.

Pint & a Bite? A great way to start your festivities is with a full stomach of food! This way your body is prepared for what you are about to punish it with. It’s like stretching before the big game so you don’t get any cramps. Timing isn’t key but actually doing it would be clever! We’ve all have had those night where your stomach is whooshing with only alcohol in it. Never pretty, but you know what is? A bacon burger with pepper jack cheese! A side of ranch and you are golden! It’s nice to be nice and that goes for you and your stomach too!
So you ate food with a satisfying stomach but still hungover? This is okay because it happens. Grabbing anything can be okay but it all depends on the person. Sometimes eating hot foods can give people heartburn (which is a bitch!) and some rather just get rid of what they got! A few usual foods to eat are any type of fruits, helping from its Vitamin C roots and giving you energy, bananas work well because it is probably one of the most potassium-rich foods, and a slice or two of plain toast could never harm you!

Ahhh SLEEP FOREVER!!!!! Sleep is our favourite life treatment for any sort of discomfort! The saying “sleep it off!” has its time to shine when you are holding your head! Getting up for a quick bite and a nice glass of water would be useful and then retrieving back to your bed again to lay in luxury. While you are up eating, grab a cool wet cloth and bring to your dark room to lay back down. As assumed, put the wet cloth on your forehead and continue counting the sheep...1...2...3...Zzz…

The Cure: Ah, the good ole Irishmen’s hangover cures! As experienced, this will help but only for so long. After your session, you will get your hangover back hours later but worse than it would have been! Doing this will be like hitting two birds with one stone; more of the lines as two session’s one hangover. (Double the excitement but twice the pain for your next rude awakening)
Not a beer-in-the-morning kind of person? Maybe some pills to cut off the edge! Poppin’ pills as you wake may seem like a problem to some but it’s nothing but a cure! You ever get that “best idea ever!” after a solid night of drinking? Well yeah, it never is any sort of good idea…ever. As many drunk people would think, taking a few painkillers before you go to sleep would be smart considering the pills will kill the hangover before even hitting you. Well no, this is actually a bad idea considering mixing pills with alcohol would be your first mistake. Not only will you still wake up with a hangover, but the mixing of the pills and alcohol will cross with your stomach since the alcohol is still prominent. Taking an aspirin or ibuprofen in the morning will help ease the pain off your headache. Take two at max and hop in the shower to feel that hangover melt away! It’s similar to a sunburn, shortly after feeling like a bikini model under a waterfall, the pain will slowly come back but leave over time.

Bang Bang Skeet Skeet: An early morning session to get your mind off things is never a bad idea! Some say blow jobs and bubble baths is your path to success considering you are transfer blood from one head to another! After having sex, you always feel like a king (well should or it’s your own fault) walking down the hallways with a smile. A grade A distraction from your hangover would work more wonders than Dr. Phil. Similar to the shower, over time the pain may come back but call around for round two to knock that baby out! Which baby are we knocking out? Well, that’s up to you to decide!