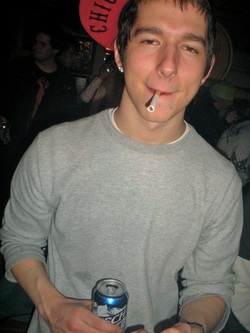 Gettin' it in like a parkin' spot.
_Mico: My good friend Mico! We go as deep as the bums can sink to the bottom of the beer barrel! Mico and I have had our drinking days like no other. No matter what time or day, when or where, we were drinking. I met Mico the same night as I met Robert. He came over to the crib in my cold ass garage. As time went by we started drinking more and more! One night at Jordan’s it was Mico, Anne, and I. I remember talking to Mico and telling him that I love him and especially because he is a bum like me! He looks up at me and asks if that’s a good thing. Hell yeah that’s a good thing! That means that he can drink it up all day and any day! It was like a drinking buddy from the Gods! I finally found a drinking buddy that can go beer-for-beer with me ever since my boy Schuh.

Porch: “You can drink like a case in one sitting right?”

Mico: “Oh yeah man of course, I buy a case every day.”

Right then and there it was an every weekend; if not every day on a drinking binge. So many parties and so many cases on top of cases we would go through on a weekly basis.  There’s a lot more to it than drinking. There’s also smoking haha. We do our share of that too but Mico has my back and he will stab you with scissors! There was a weekend when I called Mico to buy me a case of beer for this party and he ended up tagging along (Story waiting to be written). To narrow down the night we went to Johnsburg, IL and we both went there broke, drank and stole all of their booze basically right in front of them, Mico pulling a pair of scissors on a lad because he thought he was talking shit to me, a little riot break out, their bitches made us stay, cops come, I get locked out while Mico is inside, I make my way inside thanks to Mico, we sleep over, eat their food, talk shit to them, leave at 9am in the morning, and the taxi driver knew her mom so we talked very poorly of her. Our many adventures went on but slowly but surely our area turned into a ghost town. I ended up moving to Elgin, Mico ended up in Lake Island and with all of our friends in Arlington Heights; it wasn’t easy getting around. But in the end it doesn’t matter because we will figure it out as we go along, and everything will fall in place if you let it too. Narrowing down Mico into anything, it won’t be easy, but if I had to pick for any wanna be Robert haters; it would be “Drinking Buddy.”