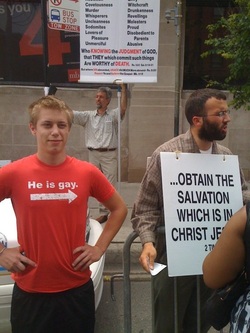 Taking the joy in life with a little comedy.
Eric Plancon: This is one of the lads you look at and get a chuckle out of and when you hang out and have a few beers with him it’s always a great time; this creative lad and I go back a few years at a random party where he was rocking the beer in hand and no T-shirt! Well Jesus Christ, if I never thought that was the best outfit not only on myself, I think I found myself a match! Eric and I have had our drunken nights out and about but what made us come that much closer was a common hobby of ours. Eric and I enjoying filming, writing, and directing short films, skits, etc. but Eric actually knows what he is doing when it comes to it! I am just a lad doing whatever I can while I can and enjoying every little bit! About a year ago I had an audition for the upcoming Adam Sandler movie “That’s My Boy” and Eric messaged me since we have these similar interests. From there we talked a little more here and there until he told me he was filming a short film project for college! I told him that I was very interested in acting in it and he said he would like for me to audition for it! Before my audition, Eric seen a few short episodes of “The Pointe” on my website and liked what he seen and said I he wanted one of his characters to be just like that! I was excited and was ready to start learning the script! But over time, apparently he couldn’t get a hold of me and replaced me with another actor, sad enough but it happens. Now that Eric is reaching for the stars in his Film Making career I can see him zooming up the ladder of success with his creative, clever, and very funny personality helping him with every step! If you or anyone have any great short film, skit, and/or internet episodes in mind don’t be shy for Eric to turn your thoughts a reality!

For any further information you may check out Eric’s YouTube channel: